Adopting a new joint-approach to tackling domestic abuse in Hackney 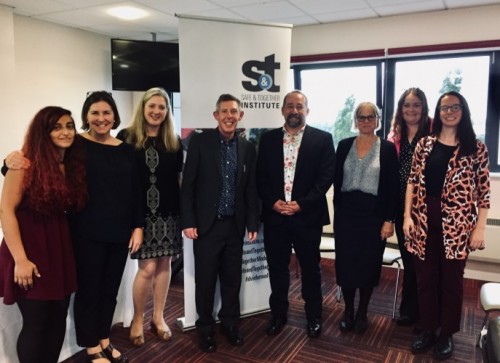 Safe and Together London

Hackney and Waltham Forest councils are the first local authorities in England to adopt a new evidence-based approach to working with families affected by domestic abuse, which focuses on keeping children ‘safe and together’ with their non-abusive parent.

The councils' Safe and Together Partnership London launched at a conference, where senior leaders from both local authorities were joined by guest speakers including Nicole Jacobs the first Domestic Abuse Commissioner for England and Wales, founder of the Safe and Together Institute David Mandel, and children and family members of domestic abuse survivors, who shared their stories.

200 delegates from across the Children and Families Services at both Councils were present at the conference, which took place on 30 September at Leyton Orient FC Conference Suite. Representatives from NHS England, MOPAC, Women’s Aid, and other national organisations and partnership agencies, including police and health colleagues also attended the event

The Safe and Together model is an evidence-based approach to domestic abuse which focuses on ensuring that, wherever possible, children are kept with the adult domestic abuse survivor to enhance the safety and wellbeing of children and that abusive partners are held responsible for their behaviours as parents.

At the conference, Luke Hart described his experience of domestic abuse and the impact of his father’s murder of his mother and sister two years ago. Ivan Kigenza also spoke about the domestic murder of his sister Linah in 2013. Both commented on the difference that the Safe and Together model would have made for children and survivors of domestic abuse.

Earlier this year, Hackney Council launched its Violence Against Women and Girls Strategy 2019 - 2022. This three-year strategy sets out the Council’s plan to tackle violence against women and girls through a public health approach, which centres around primary prevention and early intervention through multi-agency systemic approaches.

We are proud to be working with Waltham Forest Council to implement this results-proven approach to domestic violence in London, which has already made a real difference in other areas that are using the model.

Domestic abuse comes in many forms, all of which have a lasting impact on children - whether they are the direct target of abuse, or are witnessing a loved one being abused. This new, innovative model will allow us to work with non-abusive parents and their children to ensure that both are safe from harm and distress and to engage with people who have committed domestic abuse to prevent further harm.

Information, support and guidance on domestic abuse and how to report it can be found here: https://hackney.gov.uk/domestic-violence

Adopting a new joint-approach to tackling domestic abuse in Hackney