A decade of Hackney school-children being simply the best

In the last decade over 25,000 young people have proved you don’t need to compete against others to be a winner, through the Council’s annual Personal Bests.

This year over 2,000 Hackney children took part to beat their own personal bests in the borough-wide sports competition.

It was the tenth annual Personal Bests – the Council’s Olympic Games legacy, health and wellbeing project, which sees teams and individuals compete against their own personal bests developing new skills and receiving information on ways to live a more active and healthy lifestyle. The children that showed the greatest levels of improvement were chosen to represent their school at the finals many for the first time.

This year 40 local primary schools participated from years groups 1-6 with 450 young people taking part in the finals at Hackney Marshes on 5 July.

St Dominic’s primary school took the trophy for first prize after their team accumulated the most new personal bests at the finals. Lauriston came second, and southwold third.

Cerise Currie, Sports teacher at St Dominic’s said: “This is the tenth year we have attended. It was great for the children to finally win as they tried so hard.”

Hackney Council and healthy lifestyles provider Core Health provide the coaches for the Personal Best programme, both within the participating schools and then at the final event. Pupils from the City Academy and Stoke Newington school were also there to help out on the day, volunteering their time to help coach and support to the children taking part.

Baraka, 15, a student at The City Academy said: “It was good. I enjoyed coaching the children and developed my leadership skills.”

The Speaker of Hackney, Cllr Soraya Adejare, was on hand to present awards to the winners alongside special guests. 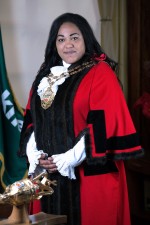 The atmosphere was electric, it was great to see so many children enjoying sport and it was inspiring to see their determination to improve themselves and really work hard. I want to congratulate all of the young people who took part. I hope it encourages more children across the borough to take part in sports to help improve their health and well-being while having fun with their class mates.

A decade of Hackney school-children being simply the best