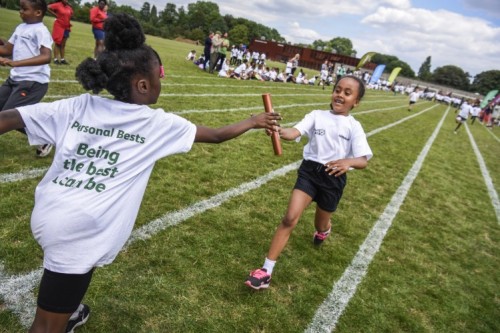 Pass the baton the day finished with a relay race

Over 1,500 children took part in the Personal Bests sports programme this year, proving you don’t need to compete against others to be a winner.

Now in it’s 12th year, the event sees teams and individuals compete against their own personal bests developing new skills and receiving information on ways to live a more active and healthy lifestyle. The children that showed the greatest levels of improvement were chosen to represent their school at the finals, many for the first time.

The event took place at Hackney Marshes on 3 July, attended by 14 of the borough schools, with St Matthias and St Dominics coming in joint first followed by Lauriston in second and Sebright School coming in third.

Oscar, who is in Year 3 at Shacklewell Primary said: “I have enjoyed the shot put and step jump. I am really proud for starting from a low score and improving my personal best today.”

Carol Gallagher, a teacher London Fields Primary said: “It's been a lot of fun, the children really enjoyed themselves, and have shown determination to achieve their personal best in a fun way.”

The event was organised by the Council’s Youth Service, Young Hackney, and was supported by a number of volunteers including pupils from Stoke Newington Secondary School, City Academy as well as employees from local businesses.

It’s amazing that so many children can come together at events like this to enjoy sports, have fun and realise their potential. I want to say a big congratulations to every young person who took part, I hope Personal Bests helps even more local children take part in sports to improve their wellbeing, enjoy themselves and make new friends.