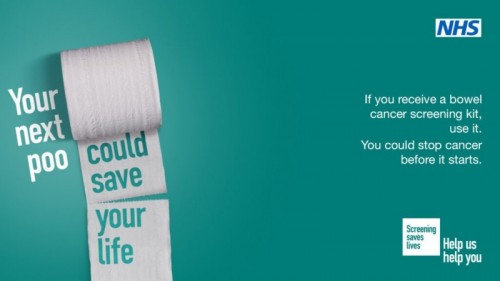 Hackney Council is working with NHS London on a lifesaving campaign to encourage more people to check if they could have bowel cancer by completing a free at home screening test.

The campaign, which uses the phrases “Your next poo could save your life” urges people who have been sent the free screening kit in the post, to use and return it.

Previously, everyone aged 60 to 74 years who is registered with a GP and lives in England was automatically sent a screening kit every 2 years. However, the programme has now expanded so that everyone aged 50 to 59 years will also be eligible for bowel cancer screening.

Thanks to the screening programme, bowel cancer was caught early for London resident Simon Clarke, 67.

Simon was investigated after his bowel cancer screening test and, in November 2021, polyps – little growths – were removed from his bowel.

He said: “I wasn’t particularly worried. I’ve always had the attitude it wouldn’t be me that gets ill. But when they analysed the polyps, cancer was in one of them. They caught it as a very minor tumour, and it hadn’t spread. Without the screening I wouldn’t have known it was there.”

Chair of the Community African Network and a volunteer at her local GP surgery, Janet Murungi, 56, from Hackney leads a busy life and found herself putting off the test. She said: “I reminded myself, good health is wealth, especially as one ages!”

Janet was surprised by how quick and easy it was. “The instructions were very straightforward, it’s very easy to do – you just follow a few simple steps and you’re done.”

Janet sent her sample off using the pre-paid envelope provided. “I prayed for it to be fine,” says Janet, who felt a huge sense of relief when her results came back clear.

As the fourth most common cancer in the country, anyone can get bowel cancer. So, I want to encourage everyone who gets a test kit in the post to use it and return it. I’d especially like to urge our residents from all our diverse communities to take the test, as uptake in these community groups has been consistently low.

Taking the test is easy and convenient. It involves providing a small sample - privately, in the comfort of your own home - and then sending it off to the lab. Screening can help prevent bowel cancer or find it at an early stage when it’s easier to treat. Those who complete bowel cancer screening are 25% less likely to die of it.

Dr Sandra Husbands, Director of Public Health for Hackney and the City
„

A specialist team from the NHS will be visiting places of worship, community centres and community spaces including hair salons, restaurants and supermarkets to provide more information about the programme and to answer any concerns from residents.