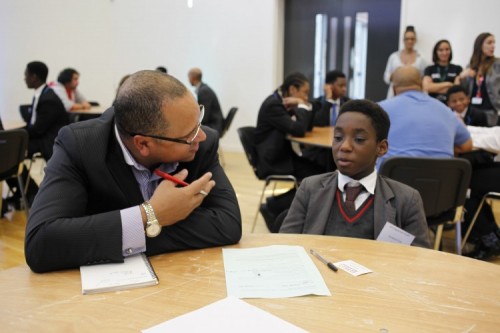 Young men from across Hackney attended an inspirational careers event earlier this month as part of the boroughs Black history season.

The day saw local professional men and entrepreneurs of all ages from Black, Asian and Ethnic Minority backgrounds share their stories and offering informal career advice on their field of expertise in a bid to motivate and galvanise young men.

Guest speakers included a local comedian, a music producer, a MET Police Officer, company directors, and people from other fields who all had an inspirational story to tell.

Joel Agyeman from Cardinal Pole School said: “I enjoyed the talks at the beginning, I liked how they talked about their background, like when they were our age, it has made me think about the decisions that I make today and will make soon, I feel really inspired for my future now.”

The young audience listened to speeches and took part in discussion groups to talk informally with all 23 of the speakers.

Funmbi Omotayo, who won in the Black Entertainment Comedy awards when he started his career in 2014, got a warm reception from the audience, and lots of laughs from the youngsters. Speaking about his life growing up in the area, he said: “I grew up in Hackney, it’s nice to give back to the young people from your local area who are now coming up after you.”

The speakers gave valuable insights into their chosen career paths, talking about their real life experiences, successes and failures, which all helped them grow and achieve. Young people discussed perceptions of young Black men in the media and the effects it has on their aspirations. The groups also talked about the importance of learning about Black history and having good role models in celebrities and peers.

Paul Ryan, Managing Director of Rising Tide, a Hackney-based youth music charity, said: “I want to help empower young people, talking about my background, which is not too dissimilar can hopefully help young people identify with me, so my advice seems relevant and can be useful as they go out into the world.”

The speakers represented a diverse range of careers from the arts and sciences to social care and policing, giving young people an opportunity to network and think about what they can achieve in their future careers. This event was a great way to celebrate the successes of local people and inspire young people to be the successful people of tomorrow.

For more information on Young Hackney and to see what other events they are hosting for Black History Season you can visit: www.younghackney.org.