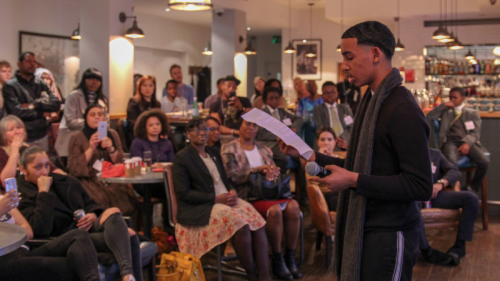 A groundbreaking literacy project at a school in Woodberry Down, is helping boys improve their reading and writing, to close the gender gap in education.

The ‘Our Literate Boys’ project which is run by 1st Verse Education, is a 12 session course designed to engage boys from secondary schools in literacy. It has been delivered for the first time at Skinners Academy, for boys in Years 8 and 9, allowing them to explore words and language in different formats like film, short stories, music and spoken word, before developing and presenting their own pieces of work.

The course was developed by English teacher Alexandros Ayeni, in response to the ‘literacy gender gap’, low achievement levels and high exclusion rates for boys, particularly for those from a black, asian and minority ethnic (BAME) background.

Mr Ayeni, said:  “The literacy gender gap for boys still very much exists and becomes even starker for boys from a BAME background. The course has been designed to encourage students to enjoy and appreciate literacy, which also links to the assessment objectives for their English Language and English Literature GCSEs. The students are also developing a range of life and employment skills, which will help them once they leave school.”

The project culminated in a ‘Power of Words Exhibition’ where the students presented their literary pieces of work, at media agency MediaCom in Central London. The Deputy Mayor, Cllr Anntoinette Bramble, was the opening speaker at the exhibition.

1st Verse Education plan to roll the course out to other schools in Hackney next year.

“Taking part in this project has made me realise there's more to me and my identity and there's another side of myself that I can express. I really want to thank Mr Ayeni and Mr Alexis because they've shown me a different vision and opened my eyes to things I couldn't really see before."

"The outcomes for the students on this year’s course has been fantastic. It has developed their confidence and a deeper understanding of GCSE English. And as a teacher they have challenged me to have a fresh outlook on literacy, not to limit it to the accepted forms of books and pre 18th-century poems.

“It has also shown me what can be achieved when education is stripped of educators’ prejudices and preconceptions and from the pressures of exam results. It will succeed across every metric that society has conditioned us to believe limits or privileges particular groups of people. For everyone working in education, it is our collective responsibility to develop every student’s’ latent skills, abilities and power."

It was clear to see what a powerful and transformative experience it had been for the students, allowing them to explore their own identity and heritage in creative ways using the power of language and words to develop their own statements.

As the Lead Member with responsibility for Hackney’s Young Black Men’s programme, it is important to me that we address inequality and disproportionality in education, particularly for boys from African and Caribbean backgrounds at Key Stage Two, Key Stage Three, and GCSE. Projects like the Our Literate Boys, is a great example of where schools can develop a rich and broad curriculum to ensure every young person can achieve and close the gap for BAME boys in education.