Following a review of these schemes, and taking into account feedback from residents, a number of actions are being planned to reduce traffic and improve the CS1 route in Hackney.

The route has been divided into five sections, with the main actions listed below. All proposals will be subject to relevant consultation and approval processes.

Last year, as part of Cycle Superhighway Route 1 (CS1), three roads were filtered to restrict through traffic around Wordsworth Road. These measures have succeeded in reducing motor traffic on the cycle route and improving road safety near schools.

*For updated information on the Walford Road proposals, visit www.hackney.gov.uk/walford-road-area*

In December 2017 and January 2018, we consulted on traffic-calming measures in the area bounded by the A10 Kingsland Road, the B104 Stoke Newington Church Street and Albion Road, and Mildmay Road / Crossway, aimed at reducing the volume of traffic travelling through the area and improving safety for cyclists along Cycle Superhighway 1 (CS1), while still allowing residents to access their homes.

The proposals followed concerns from residents and businesses that increased numbers of vehicles are rat-running along residential roads, including Walford Road, Brighton Road and Nevill Road. They are aimed at making the area safer and more pleasant for everyone, especially pedestrians and cyclists, and creating healthy, safe and attractive streets for people to enjoy.

We expected to share this modelling with residents in October, but, unfortunately, the modelling process is taking longer than anticipated. We apologise for this delay.

The detailed traffic and air quality modelling will:

Any potential impacts on traffic and air quality will be published when completed, alongside a full analysis of the consultation responses, including petitions.

Hackney Council has been working with William Patten School as part of our schools air quality monitoring project for some time. We are working with the school to put in place measures to reduce pupil exposure to air pollution, which includes paying for a green wall and screens for the school gates.

The filters in the Wordsworth Road area will be retained. These  have proved controversial due to increased traffic on Brighton Road and Walford Road in particular, and the fact that residents’ ability to drive across the area is restricted. However, the Council feels that the closures have succeeded in reducing traffic on the cycle route and improving air quality and road safety near the schools.

The existing closures, implemented in temporary materials, will be upgraded with measures such as physical kerb build outs

Build outs will be implemented at the school crossing patrol location by St Matthias School.

A design workshop will be held with local residents to develop ideas to reduce the conflicts between pedestrians and cyclists around Butterfield Green.

A protected cycle lane will be built on West Bank following consultation earlier this year. The outcome of the consultation shows overall support for the scheme.

Junction to be made permanent and safer by building a wider island, narrower junction mouth and raised entry to help enforce the one-way operation. Additional signage to be added and guard rail to be removed to improve crossing point.

Design for a parallel pedestrian & cycle crossing has been prepared and is being consulted on during November.

This area is still difficult for cyclists due to parking and loading arrangements. These are being reviewed with Islington Council and will be rationalised where possible.

Zebra crossing to be raised to slow traffic.

Investigating a scheme to reduce traffic and simplify the junction.

This section is jointly maintained by Hackney and Islington and is also on the Strategic Road Network. Discussions are still ongoing but the aspiration remains for a protected cycle lane on Balls Pond Road between its junctions with Culford Road and Kingsbury Road. 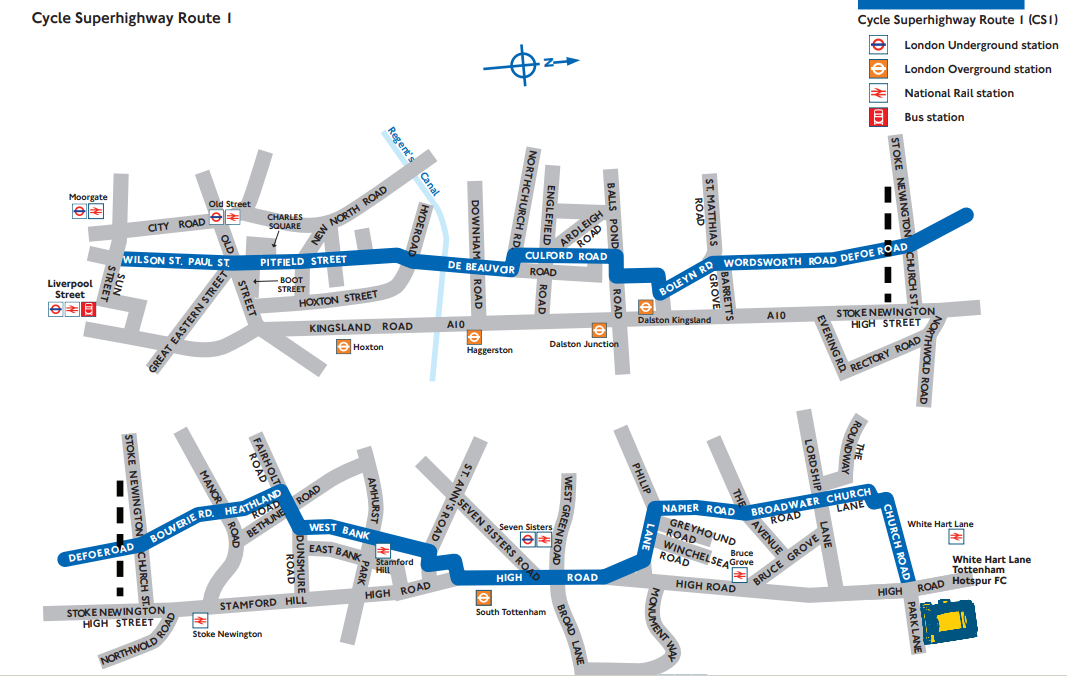