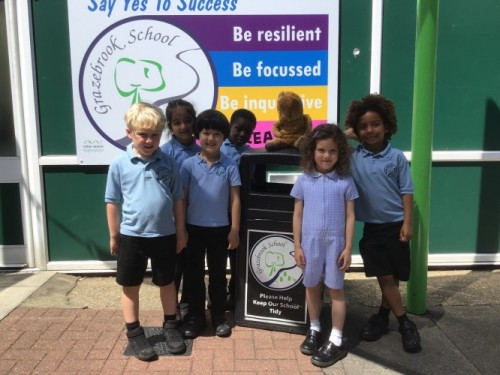 It wasn’t quite a teddy bears' picnic for the Grazebrook Primary school bear who was accidentally thrown away and picked up by a bin lorry earlier this month.

The bear, who is 59 years old, lives in the school’s Year One classroom. As part of a tidy-up on 6 June he was put in a bin bag for safe keeping, unbeknown to the cleaner who came along in the morning and put him out with the rubbish.

From then on the bear went on his own story-book adventure. When teacher Mrs Oakley realised what had happened, she went out to check the school bins, but to her horror they had just been collected by the bin truck.

Thankfully Mrs Oakley rang Millfields Depot to explain what had happened and how important Teddy was to the school, Hackney Council staff at the depot quickly got in touch with the bin truck, which was on its way to the incinerator in Edmonton. The truck was then diverted back to the depot by driver Paul King and his colleague Steve Large.

The only way to find Teddy was to get stuck in, the team emptied the ten tonnes of waste onto the depot floor, with Paul, Steve and their colleague Glen wading in. Checking each bag in turn, it took two and a half hours, with Council staff shocked to see lots of un-recycled materials, but they eventually found him. 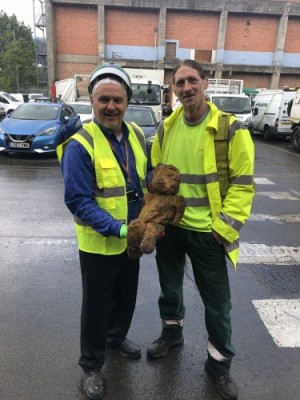 The bear was owned by Mrs Oakley’s late husband, and was given to him by his father, almost six decades old, Teddy is much loved by everyone at the school and has befriended many generations of children.

Glen Whitby, Refuse and Recycling Manager who helped find the bear said: “The bear had a very close call, but since he was such a beloved member of the community at Grazebrook school, we knew we had to act.

“Though it took us over two and a half hours sifting through rubbish, we found him! Now after a good scrub and a few replaced stitches, it's great to hear he’s back at his desk and enjoying school again.”

As a thank you the school created a custom version of the picture book ‘This is the Bear’ about a bear who gets sent to a rubbish dump, and each child in the class drew a picture of Teddy as a thank you to the team. Glen and his crew have also been invited to the school for a special story time with Teddy and the year one class.

Like a fictional toy story come to life, it's great to see Teddy reunited with his family at Grazebrook Primary School. I want to say a big thanks to the dedicated staff who took the time to save Teddy and put a smile back on all the children’s faces. Here’s hoping Teddy will have another 59 years or more bringing joy to children at the school!

Mrs Oakley said: “Teddy is a sentimental keepsake of my late husband, who was mischievous and he would be tickled pink about Teddy’s story.

“I took Teddy to school to show and teach the children to appreciate how things deteriorate when they get old, and how the construction of toys has developed and changed. He is stuffed with straw, rags and is not easy to clean. He is not soft and cuddly like modern teddies.

“On behalf of the children of Grazebrook and myself, I can’t thank Glen and his staff enough, they responded so swiftly and were so kind; they understood immediately how important Teddy is to me. The staff at the depot are modern-day knights in shining armour.

“As a consequence, the Grazebrook School community has made important links with a fantastic team, willing to educate us about rubbish sorting, recycling, collection and disposal. The children are looking forward to a trip to the dump!” 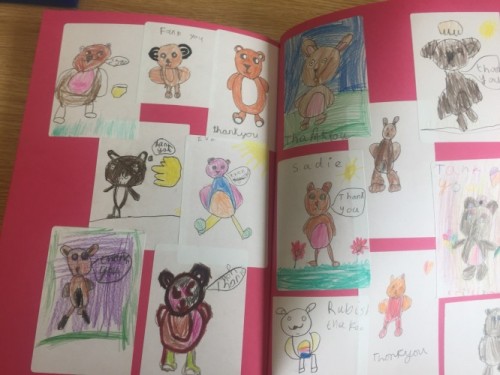