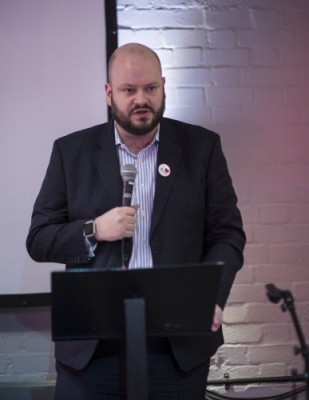 Independent traders, local politicians and business experts today held a summit on how to keep up the pressure on Government to rethink its huge hikes in business rates.

From April, hundreds of businesses across Hackney will have to find tens of thousands of pounds extra. Some face an increase of over £100,000. There will be similar rises over the following four years, and many fear they will be forced to close.

This is because the Government has revalued their premises, which business rates are based on, and property prices have more than doubled in parts of Hackney. The borough’s average increase in ‘rateable value’ is 46% - the highest in London and five times the England average.

About 80 small business owners turned out for the summit, organised by Hackney Council and the East End Trades Guild, filling the venue, Hackney House, in Shoreditch.

Earlier this month the Council and the East End Trades Guild, which represents independent traders in Hackney and Tower Hamlets, launched a petition calling on the Government to provide support for businesses disproportionately affected. Attendees at the summit agreed to try to get 10,000 signatures before the petition is handed in to Downing Street next Friday (3 March), and to keep working together for longer term reform after the Budget in March.

Mayor Glanville said: “One of the things which makes me proud to be the Mayor of Hackney is that our borough has a history of collective action. Of standing up in the face of injustice.

“The sheer severity of the impact on this part of London is unjustifiable if you have any care for the social, cultural or economic fabric of its communities. It is not right that thousands of businesses could be priced out just because the bricks and mortar around them has doubled in price.”

Sue Terpilowski said the public outcry so far had influenced Ministers to reconsider their initial plans for Business Rates increases in April. However, she warned “that is only the start of the campaign” and much more work would be needed to achieve the policy reforms required for London’s Business Rates system.

Rachel Laurence echoed that sentiment: "The Government know they will have a fight on their hands if they persist with this. The noise we are making now is great in the short-term, but it is just the beginning of a much longer journey."

Meg Hillier said she would make sure Hackney’s voice was heard in Parliament, adding: “Businesses like yours are the lifeblood of our communities. This is the biggest onslaught on small businesses that I have seen in my lifetime.”

Rosie Wolfenden said: "The increases in Hackney and Tower Hamlets are beyond comprehension. Small businessses need to be nurtured not destroyed."

Len Maloney’s garage in Haggerston works with a local charity to provide job opportunities and mentoring for young people. He said: “These increases threaten my livelihood and my small team of workers and future workers. At JC Motors we have tried to give our customers and our staff an honest break. I think we deserve the same treatment.”

Sarah Haque started her business in 2004 with her son. "One day I would like my son to take over. With rates going up like this it makes the future very difficult," she said. However, she ended on a positive note that collective action can bring about change: "It's time to move forward and remember that together we are stronger."