Sporty Hackney Speaker gets fundraising on the Marshes 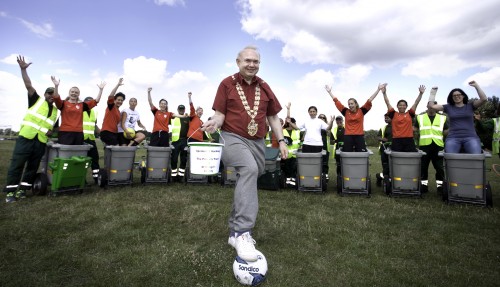 Hackney Marshes was a host to a charity fundraiser on Sunday 11 August in aid of the Speaker of Hackney, Cllr Michael Desmond's chosen charities.

Spectators were entertained by a free kick competition followed by an exhibition football game between Hackney Ladies and Haringey Ladies.

Hackney managed to hold Haringey to a 1-1 draw at half time despite being the underdogs, playing two divisions below their opponents.

The home side, who were founded in 1986, put up a good fight but eventually fell behind and finished the game 1-3.

I really enjoyed supporting Hackney Ladies in the fresh air and open-space of the Marshes. Hackney Ladies are one of the best sporting teams in the borough and play their home games at the iconic Hackney Marshes, famous for hosting grassroots football. Both sides played very well, entertaining the crowd and passers by and raising money for charity, with players also making their own generous donations.

Hackney's street cleaners provided additional entertainment, taking part in a race while pushing their trolleys. Kemal Kebour, whose normal patch is in Shoreditch, triumphed over the short course.

The Speaker added: "The cleaners showed great verve, pushing their trolleys with enormous energy, maybe one day it will become an Olympic sport!"

The event took place to fundraise for the homeless charity, St Mungos and the Fairbridge Programme of the Prince’s Trust.

The Speaker plans to raise more money for his charities in the coming months, with many more events planned including the Speaker's Gala Dinner on 23 October and a Christmas Market at Hackney Town Hall on 10 December.

To donate or for more information visit www.hackney.gov.uk/speaker

Sporty Hackney Speaker gets fundraising on the Marshes
Newsroom