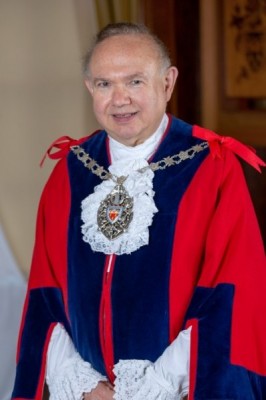 The Speaker of Hackney, Cllr Michael Desmond, gives a rundown of his September as the borough's Speaker:

We’ve just had the Jewish New Year, no socially distanced celebrations at midnight for us, more a time for reflection and regeneration. Each year it begins at sunset according to the Hebrew lunar year, about 11 days shorter than the solar year, using the 19-year Metonic cycle to bring it into line with the Gregorian calendar.

It leads up to the holiest day in the Jewish year, Yom Kippur, during which many secular, as well as religious, members of the community fast and seek absolution from their sins. Not that forgiveness is automatic or inevitable, we also believe in personal responsibility and liability, it’s no good mugging an old lady today, expecting to be forgiven next week, we also pray communally asking for everyone’s sins and transgressions to be forgiven.

Most other monotheistic religions provide similar opportunities for thoughtful contemplation and renewal. Even devices on our desks and in our pockets intermittently ask us to ‘refresh’.

Hackney itself frequently undergoes regeneration, originally a small rural hamlet with fields as far as the eye could see, it was first mentioned in records as Hakney (1231), in Tudor times, Sutton House in Homerton, was built (1535), the area became favoured by nobility and remained a village until Georgian and Victorian times, when, with the onset of railways, it became increasingly urban.

Looking at census records from the late 19th Century, many residents were upwardly-mobile, middle class, or aiming in that direction - clerks, managers, postal workers, drapers, etc. Immigrants, including refugees escaping pogroms and Nazi atrocities, settled here, in the 1960’s we were blessed with a significant influx of the Windrush generation and later, Asian refugees fleeing Idi Amin’s repressive regime in Uganda, Vietnamese boat people and many others; most recently, whilst in the EU, a large number of young Europeans moved here.

As the area evolved, each culture brought its tastes to bear, particularly in recent years, with availability of a wide range of international cuisine locally.

Of course it’s not all plain sailing, change brings its‘ problems, regeneration is one thing, gentrification another. Each new wave of residents have brought their own cultural heritage, diversity has blossomed.

Hackney has regenerated and changed with the times, importantly, seeking to retain its’ architectural and cultural heritage intact.

I recently re-opened the 107 year old Marks and Spencer’s in the Narrow Way after a multi-million pound refurbishment. It is now a superb food hall with bread baked on the premises and a wide range of products, appealing to the most fastidious consumer.

And gave a virtual tour around Hackney Town Hall for Open House London - renovated in 2010 back to its former 1937 art deco glory.

The Borough has regenerated. Perhaps not as often as Dr Who, but we don’t have access to a Tardis.

Individually, we can all renew ourselves from time to time, not necessarily by buying a new pair of socks from M & S (I don’t think they sell them in Hackney any more, Primark is next door! ). Sometimes renewal is spiritual, sometimes emotional - it is invariably a positive process.

When I took, 112 year old Henry Allingham, back to his old school in Clapton some years ago, he was interviewed by the School Council - all, more than 100 years younger than him. He said when he’d been a child, many kids didn’t have shoes and had nits in their hair. How much things had improved for the better.

His positive attitude enabled him to live until 113, for a month, becoming, the oldest man in the world. Renewal, regeneration, hope and positivity kept him going. Something we can all learn from.