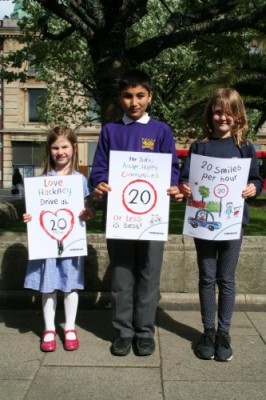 Hackney has this week begun its borough-wide 20mph rollout with Hackney Road and Pritchard’s Road the first main roads to adopt the new lower, safer limit.

It is the first of 21 phases of conversion which will see more than 99 per cent of the borough roads being made 20mph by October.

The new limit is expected to herald an estimated overall 10 per cent drop in traffic collisions across the borough based upon the reduction of up to 50 per cent in casualties on Hackney’s residential roads when a 20mph limit was rolled out on them in 2008.

It is also hoped the new limit will encourage more walking, cycling and playing outside and will create a more liveable and attractive environment.

Schools have been backing the 20mph campaign with hundreds of primary pupils designing posters promoting the scheme.

Designs inspired by drawings and words by Flora Grime, nine, Sima Torabi, five, both of Millfields Community School, and Faisal Muhibzada, 10, from Kingsmead Primary School, were chosen to go up on banners across the borough to remind drivers of the new limit.

Cllr Feryal Demirci, Cabinet Member for Neighbourhoods, said: “I want to congratulate all the pupils who designed posters for us, and especially our three winners – there was an incredible array of talent and imagination.

I think it appropriate that youngsters are involved in this rollout because the new limit is about the future of our streets: reducing the dominance of motor vehicles and putting people first.

We strongly believe this 20mph rollout will be better for everyone. It will mean a safer, calmer and more liveable neighbourhoods for all residents, leading to more walking, cycling and playing outside, which in turn will have a positive impact on health and the community.

We are asking all motorists to respect the new lower speed limit.

Signs and road markings will be used to alert motorists of the new limit. Enforcement will be carried out by the police.

Ruckholt Road and a section of Eastway from Homerton Road to Ruckholt Road are exempt from the rollout as are most red routes controlled by Transport for London.