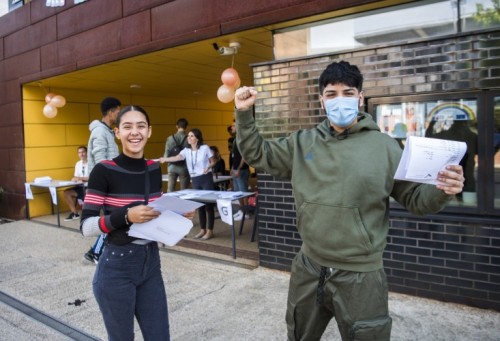 Young people across Hackney are celebrating collecting their GCSE results, with many heading into school for the first time in months, to share the moment with classmates.

The Government announced earlier this week that it was scrapping use of the algorithm that led to thousands of ALevel students’ results being downgraded. This means that GCSE results are based on school assessments.

Cherise Appiahkubi, from Haggerston School, said: “I’m very happy. I’m proud of everything! It was hard work but it paid off. Now I’m going to enrol at sixth form to study health and social care.”

Davina Thakore, of Stoke Newington School, said: “I’m relieved I got better than I expected. I wasn’t nervous until last week. Everything’s changed with the whole method of grading. Loads of people were posting about it and my parents like to keep on top of it. I’m glad they did the u-turn, I don’t think I would have got these grades if they hadn’t.”

Areefa Khan, of Haggerston School, is proud of all her high grades, especially in Spanish, and will be staying on at Haggerston Sixth Form. She said: “It’s been challenging because working at home is not the same as working in a school environment so I have struggled. Sometimes I’ve thought there’s no use or point and doing exams have no purpose. But my mum has told me there is a purpose for everything. My mum advised me not to watch the news as it's too depressing. As soon as it comes on she changes the channel!”

Abdi Ali, of Haggerson School, is going on to a scholarship with football club AFC Wimbledon. He said: “I constantly did training so I could forget everything about the results until the day came, which is when I started thinking about it. Most of my friends were nervous, when they saw the A-level results and didn’t know what was going to happen, but now I think they will be happy.”

The Mayor of Hackney Philip Glanville and Deputy Mayor Cllr Anntoinette Bramble, visited schools across the borough to join pupils picking up their results.

It was fantastic to share this exciting time with pupils - and lovely to see them back with their friends after being apart for so long.

I’m incredibly proud of each and every one of our GCSE students today. They have been through so much over the last few months, with the impact of coronavirus, their exams being cancelled and then fearing they would be unfairly downgraded as a result of the Government’s unfair algorithm.

Today is extra special for them, and I want to thank their teachers and family who’ve supported them through such an anxious time, and wish all of our pupils collecting their results today the very best with their next steps in education or training.

Schools are continuing to provide support and advice about careers, training and further education, and students should contact their school if they have questions about their results or their future plans. Hackney colleges, Bsix and New City College, are offering additional enrolment slots, alongside the Hackney school sixth forms.

Young Hackney is also hosting its annual Summer Careers Festival on Friday 21 August. Young people will be able to access free expert advice and guidance, and speak to professional careers advisers from Prospects.

Local colleges and training providers will also be on hand to talk about the opportunities they are offering. The festival will be a combination of face-to-face and virtual sessions. For more information visit www.younghackney.org/summer-careers-festival/.

The Mayor and Deputy Mayor of Hackney wrote to the Secretary of State for Education, raising concerns about ALevel results and calling on them to revert to centre-assessed results.

Read their response to the u-turn here.