Pupils at Nightingale Primary show off their brand new school 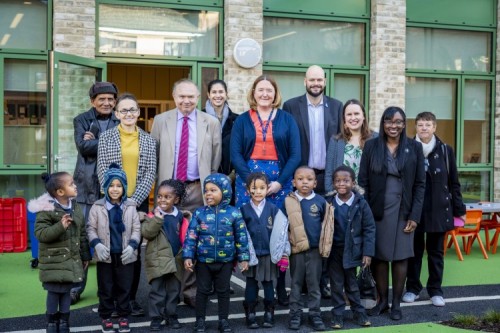 Pupils at Nightingale Primary School are settling into their brand new school building.

The school made the switch after the February half term holiday, leaving their old site at Rendlesham Road, E5, for the new school, a few minutes away in Tiger Way.

The Mayor of Hackney Philip Glanville, Deputy Mayor Cllr Anntoinette Bramble and Director of Education Annie Gammon, joined staff and pupils and local ward councillors to see the state of the art facilities, which the school had a major hand in designing.

The new building has plenty of facilities to keep pupils active and make learning fun, with a dance studio, climbing wall and a library overlooking Hackney Downs. It has various playgrounds for different year groups and a growing area on the roof with raised beds, for pupils to learn about growing their own fruit and veg, which will be pollinated by bees from their own hive.

It was great to see how excited and proud of their new school pupils are. Their previous school needed a lot of work and was too small - this new school provides them with fantastic spaces to learn, explore and play.

It has been wonderful to work with the team at the Council to bring to life our vision for this amazing new school. We are looking forward to using the specialist teaching spaces we now have to widen our curriculum and give our children memorable learning experiences.

The Council is currently considering options for the vacant site at Rendlesham Road. The intention is that it will continue to be used for education purposes.

Pupils at Nightingale Primary show off their brand new school