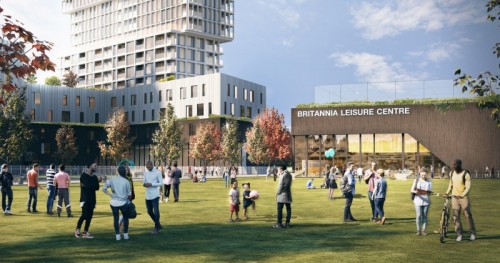 Hackney Council has revealed proposals for a new, state-of-the-art leisure centre, secondary school and housing, including options for affordable homes, on the Britannia Leisure Centre site.

The ambitious plans include a new school and sixth form, sponsored by the City of London Academy Trust, which runs the highly successful City Academy Hackney, to help provide the 1,650 extra secondary school places needed in Hackney by 2021.

The Council also wants to build an improved new Britannia Leisure Centre, including a bigger gym, 25 metre swimming pool, learner pool and introduction to water pool – which could include a flume - along with squash courts, a children’s soft play area, a sports hall and five-a-side pitches. It would also include a café and toilets, which would open onto the Park and could be used by Park visitors.

Parts of the existing leisure centre are over 40 years old, and are coming to the end of their life. Just last month, we were forced to close the pool for three days after a water pipe burst. Refurbishment options were discounted due to the estimated £14m cost, which would involve the Centre closing for up to two years.

Over the summer the Council commissioned a feasibility study to identify the options available to deliver a school and leisure centre. Residents are invited to have their say on these proposals during a consultation, which opened on 5 December. As the programme progresses, residents will be able to take part in more detailed consultations about specific elements of the scheme; for example, the facilities and layout of the leisure centre.

The consultation presents three outline options, all including a brand new leisure centre and secondary school, but with varying numbers of homes that will need to be delivered in order to fund the development. Two of the outline options include the provision of affordable housing.

Our proposals for the Britannia site would enable us to fulfil one of our key priorities; to provide a high quality new secondary school and a state-of-the-art new leisure centre to benefit future generations of Hackney residents.

This is a major project, and in the absence of sufficient Government funding to pay for it, a lot of work has been put in to find options which are achievable, both practically and financially, so we’re excited to finally be able to share the proposals with residents and find out what they think about our ideas. I really encourage them to get involved and help shape these ideas.

The consultation is open until 12 February 2017. For more information, and to find out about drop-in events, visit consultation.hackney.gov.uk