More small shops are helping to reduce the number of plastic bags given out in Hackney.

Since 5 October, all large shops have had to charge 5p for every plastic bag they give out.

In Hackney, small shops (which are currently exempt from the legislation) are being invited by the council to pledge not to offer plastic bags to customers unless they specifically ask for one. Many independent shops are also choosing to charge 5p and donate the proceeds to good causes. Others are handing out limited edition I Love Hackney reusable bags to customers.

Shops to have signed up so far include:

To sign up, shops should send an e-mail to: recycling.team@hackney.gov.uk, including their name and address. They will then be sent a free pack, including stickers and posters to promote the campaign. 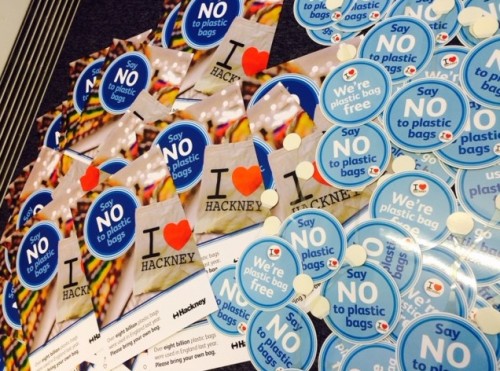 Almost eight billion plastic carrier bags were given away in England last year. That’s a total of 68,600 tonnes, 270 very second, or 133 per person. The environmental damage is substantial. Plastic carrier bags can take up to 1,000 years to degrade, litter the streets, and maim or kill wildlife.

When a similar scheme was introduced in Wales, plastic bag consumption was reduced by 79 per cent in three years, and it is estimated this latest legislation will raise £730million for good causes.