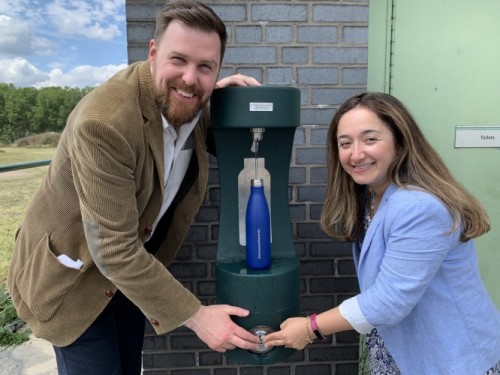 Building on the success of the Hackney Half Marathon's elimination of 225,000 bottles in just one day, the new programme is thought to be the most ambitious of any council in the country, taking the total number of water fountains to thirty-eight across the borough by 2022.

The first new fountains in the programme were installed over the summer at Dalston CLR James Library, Hackney Marshes Pavilion, and Mabley Green, which have historically been significant generators of single-use plastic bottle waste.

They are being joined by new fountains at Clapton Library, Clissold Leisure Centre, Hackney Marshes Centre, Homerton Library, London Fields Lido and Shoreditch Library Worship Street, Chatsworth Road, Narrow Way and Broadway Market over the next five months, along with many other sites across the borough before May 2022.

The new fountains will be concentrated in the borough’s busy town centres, parks and public buildings to maximise the reduction in plastic waste that can be made. The wide distribution of water fountains will ensure that, wherever residents are in the borough, they will be able to access free public drinking water from fountains and bottle refill stations.

Cllr Jon Burke, Cabinet Member for Energy, Waste, Transport and Public Realm, said: “UK consumes a staggering 38.5 million single-use plastic bottles every day, which produces vast amounts of waste and global warming emissions. Unnecessary plastic waste is also a blight on our planet, with over 420 million plastic bottles ending up in landfill every year, and a staggering quantity ending up in our oceans due to littering and uncontrolled waste disposal.

“This administration was elected on a radical municipalist manifesto to reduce the amount of plastic waste generated in Hackney. By expanding the number of free water fountains in the borough, and by ensuring they are located across public buildings, parks, and close to main thoroughfares, Hackney Council is delivering an important structural change that makes it easy for our residents to minimise the amount of plastic forced on them by the fossil fuel and chemicals industry."

The fountains in public places will supplement the 200 Hackney businesses who have signed-up to the Refill app, giving people places to go to fill up water on the move.