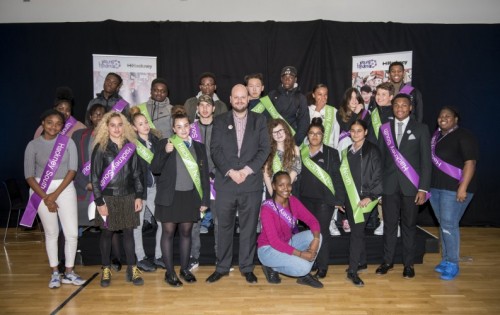 After months of writing manifestos, speaking at hustings and campaigning at schools and youth clubs, 24 young people aged 11-19 were elected to represent their peers for the next two years.

The newly elected Hackney Youth Parliament was welcomed into office by Mayor Philip Glanville, who announced the results at Forest Road Youth Hub on 20 October.

While votes were being counted by the Council’s Electoral Services team, young people had the opportunity to question a panel of leaders from across Hackney at the annual Mayor’s Q&A, which marks Local Democracy Week.

Youth Parliament representative for Hackney North, Anwer Siddig, 17 said: “I felt really proud – and I feel like I can now make changes in our community.

“There’s a lot of things in Hackney worth celebrating – our cultural diversity and community cohesion, but there’s still things that can be improved. I’d like to there to be more public spaces for kids and young people – if these spaces are well-used and open to everyone this can decrease crime, and help people feel safer when they’re out.”

The parliament meets every week and will start work on their first campaign, youth health in Hackney, in November.

Newly elected Kairi Weekes-Sanderson, 16, who is now a Hackney South representative said: “I was really surprised to get voted in, but very happy as I really want to make a difference. I want to raise awareness about what’s on offer to young people, and how they can get funding for their ideas.”

Previous Members include “singing politician” and winner of BBC talent show The Voice, Jermain Jackman, and Ife Grillo, who is a world debating champion and Vice Chair at the British Youth Council.

I am proud to have so many politically engaged and community spirited young people in Hackney.

The newly elected youth parliament will be working hard to get young people’s voices heard. The Mayor and I are looking forward to our first meeting with the parliament, I’m sure they’ll achieve a great deal over the next two years.

I would encourage all young people to find out who represents them and to get in touch with them if they have any concerns or ideas about how to improve life for young people in Hackney.