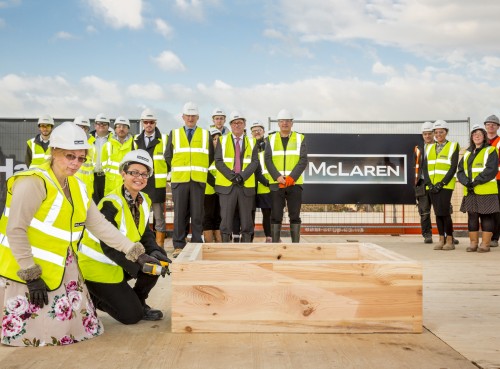 Ickburgh School marked a major milestone in its rebuild project, with the completion of the building’s framework.

The Special Educational Needs school (SEN) is being built on the site of the old Cardinal Pole School, in Kenworthy Road, using an innovative new method, which involves constructing a wooden frame of cross laminated timber (CLT). To mark this important milestone in the project, contractors McClaren held a topping out ceremony, which gave staff, the Council’s Cabinet Member for Education and Children’s Services Cllr Rita Krishna and Headteacher Shirleyanne Sullivan, the opportunity to see the progress being made at the site.

The project is part of the council’s pledge to rebuild or renew every secondary and special educational needs school in the borough under its Building Schools for the Future project. The scheme is now in its final phase and Ickburgh is the third SEN school to be rebuilt.

The new school building is due to open in September 2014.

This is a major milestone in a very important project, which is making a huge difference to young people in Hackney. Good quality, fit for purpose schools help pupils to feel inspired and motivated. I’m delighted that work is on schedule; it’s great to see the school taking shape.

The new school will boast a hydrotherapy pool, sensory and therapy rooms, a library, drama and music spaces, medical facilities and a landscaped garden. CLT is environmentally sustainable and is helping to make the building project low carbon . It also speeds up the build process, ensuring the school is delivered on time and on budget.

David Owen, Operations Director at McClaren Construction, said: "We are pleased to be at this key stage in delivering this exciting and important project for the London Borough of Hackney."

McLaren has been one of the Council’s key partners in the Building Schools for the Future project, working on Urswick, Thomas Fairchild and The Garden schools. The company recently won awards for the construction of Thomas Fairchild, being especially commended in the categories of considerate, environment and good neighbour. Their work at Urswick School also saw them pick up the People’s Choice Award at Hackney Design Awards 2012.

Hackney is leading the way in its use of timber buildings, with five major buildings and two estate regeneration projects using the material.