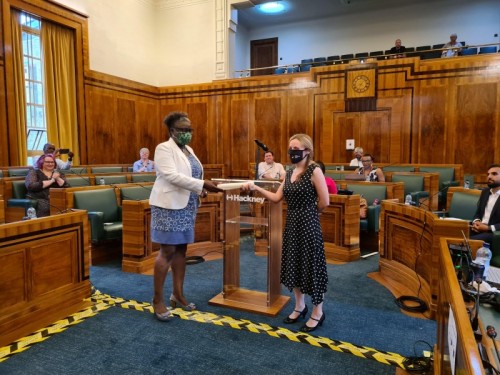 Freedom of the Borough 2

Local heroes who’ve provided healthy food parcels, mental wellbeing support, fun activities for young people and life-saving care on the frontline of the coronavirus crisis have been honoured with awards for their tireless work.

Over 200 nominations were sent in for the sixth Mayor’s Civic Awards, which were announced this week at Full Council by Mayor of Hackney Philip Glanville. This year, the awards focused on celebrating the incredible community response to the pandemic, with three individuals and three organisations receiving well-deserved recognition. 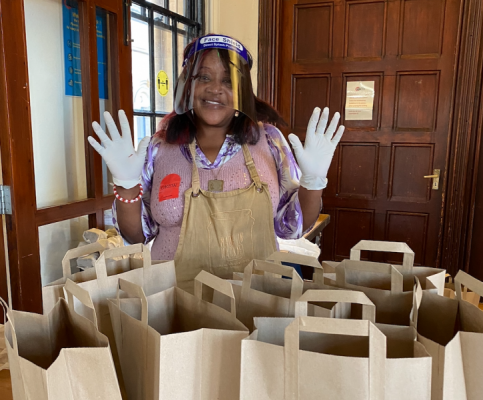 The winners of the organisation category were Bangala Housing Association, which has provided vital public health information to Hackney’s Bangladeshi community during the pandemic; E5 Baby Bank, an organisation set up to provide parents in need with clothes, nappies, toys and other essentials; and Round Chapel Old School Rooms, which has given food and mental wellbeing support to vulnerable and isolated residents.

Winners accepted their awards via video link, but Mayor Glanville and the Speaker of Hackney will invite them to Hackney Town Hall to congratulate them in person once it’s safer to do so.

Homerton Hospital and Volunteer Centre Hackney, which have gone above and beyond throughout the pandemic and over the years to support local people, were also honoured at the meeting with Freedom of the Borough awards - which is the highest honour that a Council can bestow.

Freedom of the Borough awards are given to people and organisations who have provided outstanding services to the borough. This is certainly true of Homerton Hospital and Volunteer Centre Hackney, whose tireless efforts over the past 16 months have saved lives, ensured that vulnerable people have access to the support that they need, and helped to keep Hackney safe.

Find out more about the winners of the sixth I Love Hackney Mayor's Civic Awards: www.lovehackney.uk/mayors-civic-awards-winners

I would like to give a huge congratulations and thanks to the winners and nominees of the Mayor’s Civic Awards; and to Homerton Hospital and Volunteer Centre Hackney, whose tireless efforts have saved lives and kept people safe throughout the pandemic. These awards and the honorary Freedom of the Borough announcement help us say thank you to residents and organisations who embody Hackney’s inclusive, welcoming and selfless spirit.

There are so many people, organisations and charities in Hackney who quietly transform lives all year round - and these unsung heroes have always made an incredible contribution to our communities.

But this year, more than ever, Hackney’s unsung heroes have gone above and beyond to provide support to some of the most vulnerable people in our communities. Despite facing challenges themselves as a result of the pandemic, their first thought has been about how they can help others - and I was honoured to join some of these incredible and inspirational people to thank them for their selfless work.

It’s an incredible honour to receive this award, considering all the wonderful charities across Hackney who do such great work. It’s a privilege to work in such an amazing borough with partners like Hackney Council, the CCG and voluntary sector who all recognise the importance of volunteering.  Volunteers are like the silent army who often go unseen. So this is a thank you to all volunteers who came together not just last year, but long before and after, to do what they can to help make people’s lives the best they can be.

It’s very humbling to hear all of the points that were said about the organisation. There are people who have been going into patients’ homes and residents’ homes, and looking after incredibly sick people with strong infections before we had the vaccination, and putting themselves and their families at risk, and I really wish that all the people in the organisation could have heard what was said today.

Many people have worked in the Homerton to get it into the position that it’s in now. The sort of position that’s allowed us to do what we’ve done over the past year and a half doesn’t come around overnight, it comes around after years and years of work.