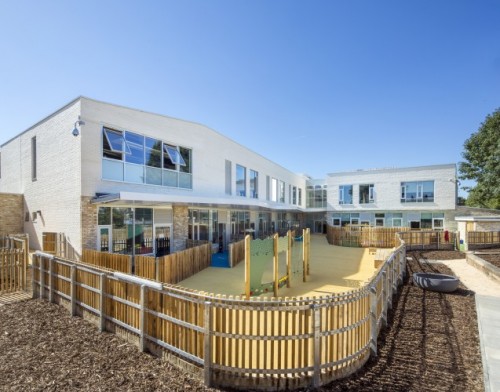 The Garden, a school in Stoke Newington for pupils with autism, has won a prestigious architecture award, marking it out as one best new  buildings in London.

The school, which was fully opened in September 2013, was honoured by the Royal Institute of British Architects (RIBA). The 150-capacity school was built as part of the Council's Building Schools for the Future programme, which will see every secondary and special educational needs school rebuilt or refurbished.

The Garden school was designed by Golifer & Langston Architects and built by McLaren Construction on the original site of Horizon school, in Wandsworth Road. It brings together the former Horizon and Downsview schools on the same site to better suit the needs of pupils, who will no longer have to change schools when they reach secondary school age.

It boasts state of the art facilities specially designed to help pupils with autism flourish. Features include a splash pool, soft play rooms and a community café which is run by older students to prepare them for the world of work.

Hackney Council and its Local Education Partnership was also presented with the RIBA London Special Award for Client of The Year award, to honour the Council’s ongoing commitment to architectural excellence in its programme of school rebuilding and refurbishment. Hackney beat stiff competition from Network Rail, the Olympic Delivery Authority, The Shard, National Theatre, and a number of other local authorities.

This is a fantastic achievement for everyone who worked on the project, but most importantly for the staff and pupils who are now benefiting from this excellent new school. Outstanding learning spaces like this inspire pupils, and a lot of work and consideration goes into making sure their specific needs are met. Their feedback has been really positive, so this award is the icing on the cake.

Jonathan Ellis-Miller Chair of the London Region RIBA Awards Panel, said: "The panel was impressed not only by the commitment and quality as exemplified by the Garden School project but by the long term term commitment to design excellence that is exemplified by a range of projects."