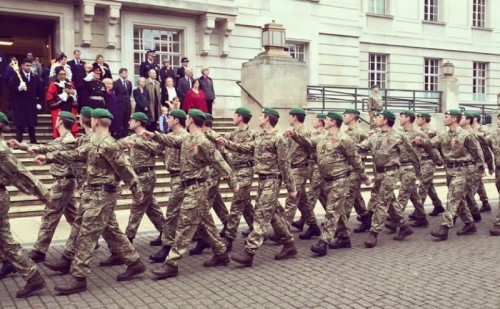 The parade of 600 following the Jewish Lads and Girls Brigade Band marched from the Town Hall to St John at Hackney Church. It was led by the Speaker of Hackney, Cllr Sade Etti and Col Morriss, the Queen’s representative to the borough with other civic dignitaries including Meg Hillier, MP for Hackney South. Taking part in the parade were representatives from the Royal British Legion, a strong contingent from 3 Military Intelligence Battalion which holds the Freedom of Hackney, Sea, Army and Air Cadets, Scouts, Guides, Cubs and Brownies, Police and Fire Service Cadets, St John Ambulance and the Red Cross with members of other local associations. 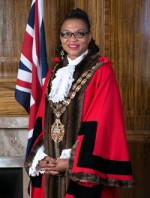 I’m honoured to represent Hackney this Remembrance Sunday. We must never forget the bravery and sacrifice of those who served during the World Wars and all conflicts that have taken place since.

On arrival at the church, the Speaker and Col Morriss, followed by many others, laid wreaths at the Cenotaph to commemorate those who lost their lives during military service. The Remembrance Sunday Service led by The Venerable Lyle Dennen, readings were delivered by representatives from the Jewish (Rev Natftali Tiefenbrun) and Sikh (Jagmohan Singh Bhakar) communities. The parade then re-formed and made its way back to Hackney Town Hall for the traditional march-past and salute taken from the steps, followed by the laying of wreaths at the Town Hall war memorial.

Col Morriss, said: "I am proud to be associated with the many people of all faiths and backgrounds who gathered together in Hackney on Remembrance Sunday to honour those who paid the ultimate sacrifice in the 100 years since the outbreak of the First World War. Those that paid that price came from all walks of life and a multitude of countries to defend democracy and their way of life. They were not all involved on the front line but fought the bombs and fires, in the factories and at home to protect all that they loved. Those that they left behind will remember them."