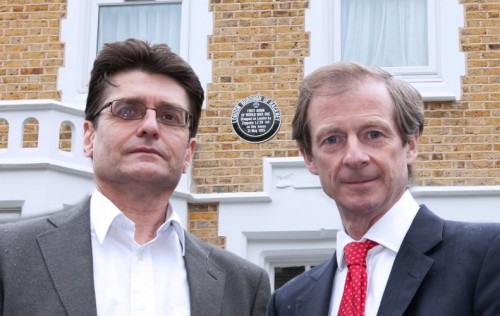 A new plaque in Stoke Newington has been unveiled to commemorate the first bombs dropped on London during First World War.

On 31 May 1915, a bomb from a German Zeppelin fell on the top floor of 16 Alkham Road in Stoke Newington – the first aerial bomb ever dropped on London. The Zeppelin continued to travel southwards over areas of Hackney, Tower Hamlets and Waltham Forest.

Beginning shortly after 11pm, this first raid took many residents by surprise as high–explosive and incendiary bombs, which are purposefully designed to cause fires, continued to fall on other areas of Hackney including Nevill, Cowper, Balls Pond, Shakespeare and Allen Roads.

Incredibly no one was injured at Alkham Road where the first bomb caused a fire to the top floor of the family home however, official figures at the time show that there were seven killed and 35 injured following this first raid, which caused forty-one fires in the areas affected.

There were over 20 more raids on London between 1915 and 1918, by Zeppelin and aeroplane, six of them affecting Hackney.

Commemorating the momentous events of that night 100 years ago, Councillor Guy Nicholson, Hackney Council Cabinet Member for Regeneration, and Ian Castle, historian and author, who has extensively researched the details of this first raid, unveiled a new plaque on 16 Alkham Road on 29 May.

The Great War acted as the catalyst for great social change to take place but the warfare that brought about this change was as terrible as it was bloody. One aspect of this was in the concept of taking a war into the heart of a civilian community many hundreds of miles from the battlefield. It must have been as frightening as it was shocking for the community in Hackney and indeed across London, to experience for the first time an attack from the sky.

It is right that in the centenary of the Great War we recognise those profound moments that so shaped the world we now live in, and recognise the courage that those on the home front in Hackney must have had to draw upon as they faced this new and terrible aspect of warfare that was literally on their doorsteps.

I am delighted by the unveiling of this plaque, which not only commemorates an important moment in the history of the borough of Hackney, but also a significant point in the history of London too. While most people are aware of the Blitz of 1940-41, many are unaware that London was bombed from the air in the First World War too.

When I first approached Hackney Council, just over a year ago, about placing a new plaque to mark the centenary of the first London air raid, the idea received immediate support and my research as to the point where the first bomb fell was welcomed. I am therefore thrilled to finally see this plaque erected on a house that deserves recognition for its unique place in history.

Hackney Museum and Hackney Archives will be launching a number of exhibitions next year to further mark the centenary of the First World War.

A Hackney Archives collection of over 100 recruitment posters that were displayed nationally and locally at the start of the War will form the core of an exhibition relating to the Home Front in Hackney at Hackney Museum from February to June 2016. This incredible collection of posters will provide young people and all residents of Hackney the opportunity to take a closer look at this historic record and to engage with the images on display as a part of the borough’s history.

A further exhibition, continuing the theme of recruitment and conscription, will also be taking place, looking at Hackney’s conscientious objectors and featuring local stories of people involved, which will be on display at the Hackney Archives.

Currently a number of local volunteers are being supported by the Hackney Archives to help uncover more of Hackney’s First World War history through researching historic collections. Along with other exhibitions, this research will help local people to engage and explore the impact of the First World War on Hackney and the effects in had on local communities at the time.