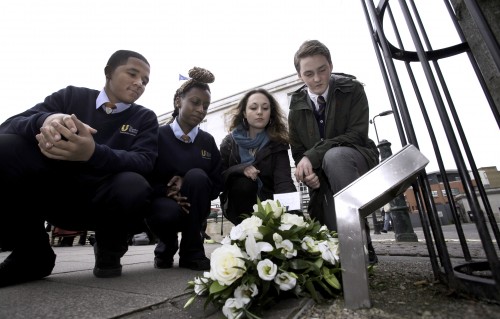 More than eighty residents, council members and employees from across Hackney came together to mark this year’s Holocaust Memorial Day.

The special ceremony, which took place on 24 January, ahead of the annual international Holocaust Memorial Day, was held at Hackney Town Hall and led by the Speaker of Hackney, Cllr Michael Desmond.

Following a poignant short film, pupils from Simon Marks Primary School led guests on a thoughtful journey through a range of heart-warming songs, and Mossbourne Community Academy students spoke of the significance of this year’s theme ‘Journeys’.

Alan Vimmer from the Jewish Police Association spoke of his experiences of visiting Auschwitz in 2013 and members of Council and students from The Urswick School read aloud the ‘Statement of Commitment’.

A short personal account by Mrs Channah Greenberg, a Holocaust survivor, and the llighting of the memorial candle and minute of silence, offered much chance for reflection.

The ceremony marking Holocaust Memorial Day was moving and meaningful, the words of a survivor who endured her early childhood in the Warsaw Ghetto reverberated around the chamber. Pupils from Mossbourne Academy, Urswick and Simon Marks eloquently expressed their feelings and there was a uniform belief that we should learn from the past and never, ever allow genocide to occur again.

The Recital of Kaddish, the Hebrew memorial prayer which was read by Cllr Desmond, brought the ceremony to a close.

Jules Pipe, The Mayor of Hackney, and guests lastly joined the Speaker at the Holocaust Memorial tree, in Hackney Town Hall Square, for the placing of a special floral tribute.