Hackney Dementia Festival is an all singing and dancing success 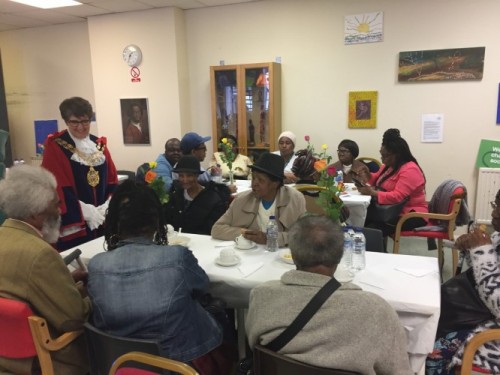 Dancing, singing, live music, films and acting have all been part of this year’s Dementia Festival with hundreds of people getting involved from Hackney and across London.

This year’s festival was the biggest and busiest to date, with over 20 dementia-friendly events taking place across the borough from 16 to 29 May. A large Singing for the Brain event at the Copper Box Arena at Olympic Park preceded the festival. It was organised by Alzheimer’s Society in partnership with GLL, the UK’s largest leisure charitable social enterprise. Performers on the day included students from Clapton Girls Academy who joined people living with dementia in a mass singing and dancing session.

Pupil Masuma said: “I learnt that people with dementia are lots of fun. They are really thoughtful and lots of them have amazing talents like singing! I loved listening to them talk and encourage each other in the activities. It was so much fun, I hope it happens again.”

Gordon from Hackney who has vascular dementia, said: “I love these events. I’ve made lots of friends from the groups in Hackney, they are like social gatherings. My favourite part about today was playing some of the instruments!”

"I was really pleased to see more people with dementia attending this year’s festival with more events taking place - from those that take place all year round to those that were especially organised for Dementia Action Week. It was also very encouraging to see people with dementia participating in events alongside those living without dementia at the Tea Dance and the intergenerational interaction at the Singing for the Brain event with Clapton Girls Academy. Another highlight was the performance by Hackney Shed youth theatre inspired by the memories of people living with dementia. Hackney Dementia Friendly Community Group put in a lot of hard work and commitment to making this happen and it's an area that we want to build on to keep breaking down barriers.

“Above all else I believe the festival has shown that people with dementia can still have pleasure in their lives and spend time with others in their communities. There has been something for everyone, which is a testament to the strong community partnerships and the Council’s commitment to being a dementia friendly borough."

"Nobody wants dementia. It’s a stressful, challenging and life-changing condition, but despite the ups and downs, we want people to know it’s still possible to live well with dementia. The singing, dancing, energy and excitement which has filled all our events has amplified this message. The festival has renewed the movement to make Hackney dementia-friendly, and we encourage those interested in becoming involved to get in touch.”

Thanks to everyone who took part in the biggest Hackney Dementia Festival to date. The range and number of events has made this a truly diverse and inclusive event helping to raise awareness within our communities. This would not have been possible without the work of our partners through the Dementia Friendly Hackney group, led by the Alzheimer’s Society and Cllr Maxwell as our Dementia Champion.

Hackney Dementia Festival is an all singing and dancing success