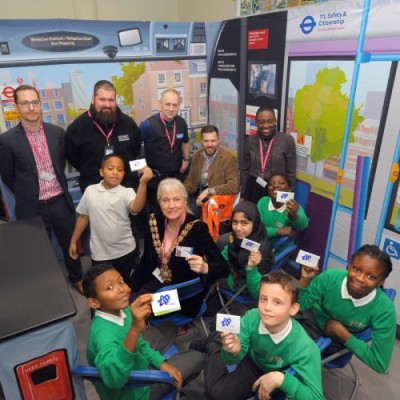 Over 20,000 children from across Hackney have been helped to become model citizens thanks to 10 years of work with Transport for London's Safety and Citizenship team.

For the past decade TFL has teamed up with Hackney Museum and other agency partners to transform the Museum into a range of practical workshops. For five weeks every year, this free event teaches thousands of children a range of life skills to help them develop into better citizens.

Activities are brought to life with models and backdrops and amongst other things the youngsters learnt about getting on and off a Tube train, crossing the road safely, simple first aid, dealing with dogs, using Oyster cards and what to do and who to contact in case of an emergency.

Since the project began in January 2007, up to 2,500 year 6 children have taken part in the scheme every year; with its first participants now turning 21.

Pupils aged 10 and 11 from 58 Hackney schools take part in the scheme, which includes small interactive sessions aimed at helping them to become more independent as they prepare for the transition to secondary school.

As children reach secondary school age, it’s incredibly important that they are prepared for life in the real world with skills that increase their confidence and sense independence.

Masnoon, from Hoxton Garden Primary school said: "My favourite part of the afternoon was pretending we were getting on the bus! It's something that I will start doing when I start Secondary School in September. I never thought that something small like saying thank you to the bus driver and smiling at him would make their day even brighter."

Masnoons Year 6 teacher, Ms Carr, who attends the event with her class every year said: "The Junior Citizenship scheme is a fantastic way of preparing children for life outside of the primary school setting. The children took so many positive things away from workshop, enabling them to become outstanding citizens of Hackney. "

This annual event is coordinated by the Safety and Citizenship Team from London Transport Museum in partnership with Hackney Museum. The Hackney Junior Citizenship Scheme is open to all schools across the borough including SEN and independent schools.