Hackney calls for support against blight of bookies 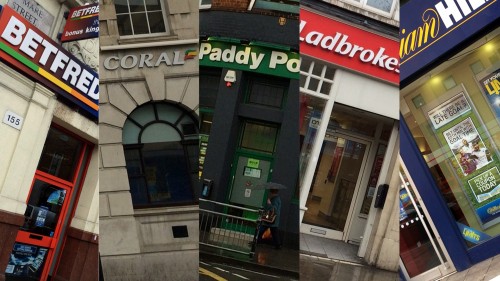 Hackney Council has launched a new phase in its campaign against the wave of betting shops blighting its high streets and cynically targeting its most vulnerable communities.

It has made a submission to government under the Sustainable Communities Act asking that councils be given genuine control over when and where bookies can open.

Its submission has received cross-party support from boroughs across London and 35 councils outside the capital.

The Council is also calling on residents nationwide to sign an online petition to Communities and Local Government Secretary Eric Pickles to demonstrate the weight of public opinion against the current betting shop free-for-all.

Something needs to be done to stop betting shops cynically targeting deprived communities. Many act like financial vampires feeding off vulnerable people, fuelling addictions and other problems and adding to the difficulties of already hard-pressed families. “They’re also sapping the vibrancy and variety from our high streets, and squeeze out potential local enterprises which could use the premises for something positive and constructive. “Our latest campaign is not about banning betting shops. We acknowledge responsible and well-run businesses have a right to trade, but we need the tools so we can strike the right balance. “The Government says it supports localism and the ideal of local people shaping their communities. Hackney is therefore asking for change on betting shops to allow this, a change recommended by the Government’s own high streets tsar and supported by a wealth of other research and reports. “We’re hoping this campaign will convince government that there is overwhelming weight of opinion from councils and the communities they serve, and to give local people a genuine say on what opens in their high streets. The more people who sign up to our campaign, the better we can make our case for change.

There are about 65 betting shops in Hackney, eight in Mare Street alone (above).

Under existing guidelines betting shops are classed as A2 - ‘financial and professional services’, meaning they can open up without planning permission in premises which previously housed such a venture, for example a bank, estate agent or employment agency. Planning rules also state an A2 class can open without permission in an existing A3, A4 and A5 premises, expanding the field further to include pubs, restaurants, cafes and hot food takeaways.

Government deregulation expected in May will make it even easier for gambling firms by removing the need to apply for permission to take over an even wider range of premises, meaning no say whatsoever for local residents in most cases.

The Council’s proposal is that betting shops be given their own use class, as with nightclubs and casinos. This would mean residents and councillors could have a say over every application, and the potential impact a new betting shop may have on an area would become a key factor on whether or not it gets approved.

The Deloitte Customer Review survey published in January found 52 per cent of people wanted fewer betting shops in their high streets, compared with just 6 per cent wanting more. Guardian research from the same month demonstrated a direct link between areas of deprivation and spend on gambling.

A London Assembly report last year found a 13 per cent increase in betting shops across London between January 2010 and December 2012, concluding government should amend planning legislation to give local communities more control.

The independent Mary Portas review into high streets, commissioned by this government in 2011, also concluded betting shops should be given their own use class, stating they are "blighting our high streets", while a Local Government Association report found clusters of betting shops harmed local economies.

Government has in the past suggested that a technical planning tool called an Article 4 Direction gives councils sufficient powers over betting shop applications. However, this has proven not to be the case by councils trying to use it.

To view Hackney's submission, visit the ‘beat the bookies’ section of our website.

Hackney calls for support against blight of bookies