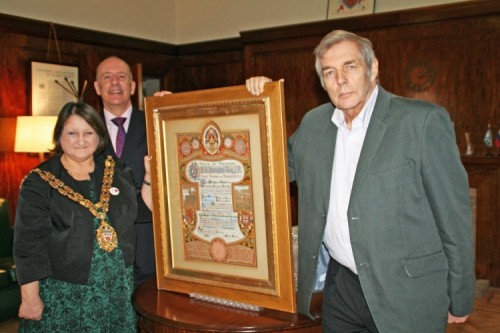 The great-grandson of the first Mayor of Shoreditch has donated a civic antique belonging to his ancestor to Hackney on the 50th anniversary of the formation of the current borough.

A scroll commemorating the presentation in 1901 of the mayoral robes to Henry Edward Kershaw, then aged 37, will be displayed in Hackney Archives, in Dalston CLR James Library, throughout some of the borough’s celebration year before being given a permanent home in Hackney Town Hall.

It was gifted from Mr Kershaw’s great-grandson Ken Kershaw, 66, who travelled from his home in New Forest to hand the highly-decorative framed parchment over to Hackney Mayor Jules Pipe and Hackney Speaker Cllr Sharon Patrick, in the Town Hall last week.

Ken, a former councillor for Slough Borough Council and Ashbury and Colhurst Parish Council, and whose mother and father were also councillors, said: “I thought the time was right to hand over the scroll for posterity as my mother, who owned the scroll, died recently, and as I’m the last of the Kershaw line.

“I am proud of the scroll and the fact that Henry Edward was the first mayor. I always included the fact that I come from a long line of local politicians in my own election addresses.”

The London boroughs of Hackney, Shoreditch and Stoke Newington merged in 1965 to form what is today known as the London Borough of Hackney.

It was fascinating to meet Ken and hear about his family history. The beautifully illuminated scroll, which is 114 years old, is remarkably well-preserved and will be proudly displayed as a memento of our borough’s past.

Hackney will turn half-a-century in April and, to mark the milestone, 50 objects with 50 stories are on display in Hackney Museum until September as part of a conversation about what Hackney means to local people.

A Victorian teen's diary and an ancient fossil excavated in Stoke Newington are just two of the fascinating items in the exhibition.

Anyone can take part by visiting the exhibition and suggesting an object they would share, or tweet from a selection of more than 3,000 items on Hackney Museum’s online catalogue, or, tweet one of their own items using #Hackney50.