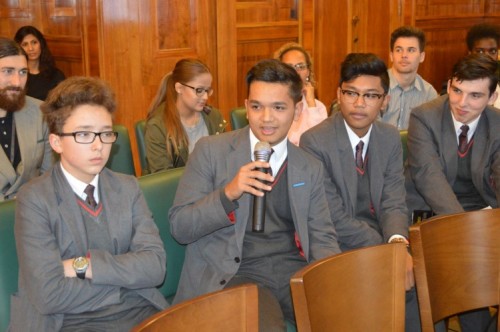 Should 16-year-olds get the vote? That was one of the hot topics most energetically debated on Wednesday during this year’s Mayor’s Q&A for Local Democracy Week.

Around 60 students from Hackney schools, aged 16 and 17, took part in a discussion with the panellists from Town Hall, Youth Parliament and the Met Police on the big issues facing young people today in the borough, including pay inequality, gentrification, diversity, crime and safety, and the vote.

The audience were divided over whether the voting age should be lowered to 16, with the vast majority arguing that teens deserved the vote when contextualised with the age of consent, joining the armed forces and being part of the working world.

Future generations will judge society today as “ridiculous for not allowing 16 and 17-year-olds to vote”, argued one history student, much as we do of women’s disenfranchisement in the early 20th century.

But others thought they weren’t ready or informed enough for the vote, with one schoolboy claiming peer pressure would prevent independent voting.

However, that was countered with the suggestion that politics should be made a compulsory subject early in school life. “If we had regular debates about politics it would mean we could make the right choices and independent choices,” said one girl.

Mayor Jules Pipe said young people backing votes at 16 was a recent phenomenon. He said: “Going back ten years, overwhelmingly the audience was against it but I have noticed a shift in recent years and it has really accelerated in the last few. My gut feeling is yes too.”

Many of the young people said they felt unsafe in Hackney but believed that would change when they got older as the influences of street and gang crime waned in their lives. Although, when asked, none said they had been a victim of crime.

Most thought they would not be able to live in the borough when they got older due to runaway house prices.

Perceived victimisation of young black men, as well as police stop and search activity toward the same group, was cited by members of the audience as a dividing force in the community.

“Loads of people, especially ethnic people are associated with crime,” said one young member of the audience, who said it ended up becoming a self-fulfilling prophecy. “People maybe accept it, they act on it.”

But another young person argued that there is a “very fine line between keeping the public safe and making sure individual freedoms are maintained”, adding that respect between the public and the police had to be mutual, and some young people had to take responsibility for their actions.

Borough Commander Simon Laurence said: “Gangs form a very small minority of young people in Hackney and they deserve our attention. I really hope we have moved on from when there was lots and lots of stop and search and that it is more intelligence-led and targeted.”

Diversity is accepted and celebrated in Hackney, it was agreed, although, according to one girl wearing a headscarf, she felt sometimes negatively stereotyped as a result of her dress.

“It makes you think first before you do things because people judge you,” she said, before urging schools to do more to tackle the issue.

Pauline Adams said: “We need to build empathy for each other. The more we talk, share and debate, the more we will be able to become a solid community.”

Local Democracy Week aims to bring together young people and elected representatives. Councillors visited schools across the borough as part of the annual event.