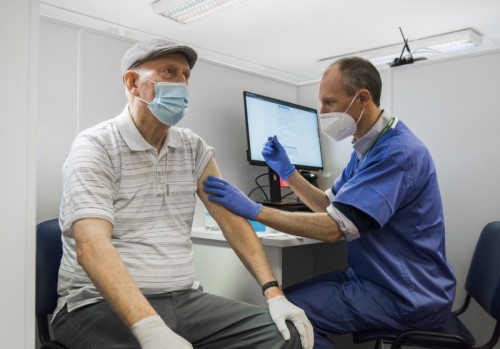 Last week saw three more vaccination sites opening across the borough, including one at John Scott Health Centre, a historical site, which opened in 1948 as the first purpose-built NHS health centre in Britain. Alongside this two pharmacists, one in Mare Street and one in Clapton are now also vaccinating patients.

This adds to the site in Bocking Street which has been operating since January.

Alongside the opening of new vaccination centres, those over 70 and people who are clinically vulnerable are now being contacted across Hackney as the borough moves on to the next cohort on the priority vaccination list. Residents are being urged to book their appointments as soon as they are contacted by the NHS.

It is fantastic news that we now have four coronavirus vaccination centres in Hackney, that means thousands of people each week can get vaccinated in their local area. Everyone needs to make sure that once they are offered the vaccination they book their appointment right away to keep themselves safe from this very dangerous and even deadly disease.

Thousands of people each week are able to get vaccinated here in Hackney.This is all very positive news. Hopefully, coronavirus will one day go the way of previously deadly viruses like Polio, Tetanus and Smallpox, which have all been beaten by vaccines and we no longer see these viruses killing or debilitating people in the UK.

The vaccine will reduce the chance of you becoming seriously ill from covid-19, which can be deadly, particularly if you’re in a high clinical risk group. Getting your vaccine as soon as you can should protect you and may help to protect your family and those you care for.

I want to encourage all residents that when they are asked by the NHS to book their vaccination appointment they do it straight away, all the vaccination centres in Hackney are staffed by friendly medics and volunteers who are making sure the centres are clean and disinfected. I want to let residents know that the vaccines are safe, we have vaccinated thousands of people in Hackney already as this is the best way to keep people safe from coronavirus.

Hackney residents over 70 who have not yet been contacted by the NHS should get in touch with their GP as soon as possible to arrange a vaccination appointment.

Residents who have received the vaccination are being reminded to book their appointment for the second dose 10 weeks after they received the first. This is to ensure people have a greater coverage of protection from the virus.

While many people across the country have received the vaccination, people are being reminded that it is still important to follow the rules around coronavirus and keep to HANDS, FACE, SPACE. As it will be a long time until everyone is vaccinated and even then there could be risks, so it is important to keep washing hands, wearing a face covering, keeping 2m apart from those not in your household or support bubble and remember to let in some fresh air.

What you can do now