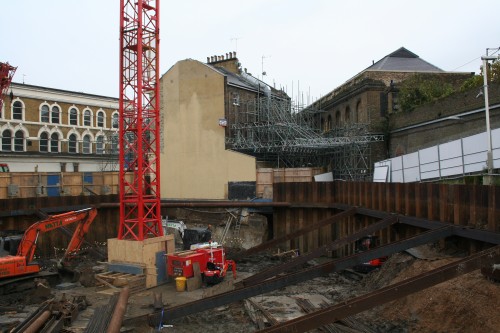 Members of the public called the Fire Brigade after noticing cracks in the walls at 5 Amhurst Road.

London Fire Brigade contacted Hackney Council and an inspection was carried out which revealed serious structural damage to the terrace.

Residents and businesses have been evacuated as the buildings are not safe.

What is the Council doing now?

Inspections revealed that 5 Amhurst Terrace needs to be demolished as it is unsafe. The Council’s contractors will attempt to protect the historic façade of 5 Amhurst Road, although this may not be possible.

Demolition will be carried out by hand in order to retrieve residents’ belongings and to avoid causing further damage. When this is complete 3 Amhurst Road will be inspected to determine the extent of the damage to the terrace.

The station will remain open, but it can only be accessed through the station car park. Step free access is available via a temporary ramp.

How long will the road be closed for?

One lane of Amhurst Road is open to traffic travelling North West between Mare Street and Pembury Junction.

What caused this damage?

Hackney Council will conduct a full investigation into the cause of structural damage.