Two people have been fined and one issued with a warning after failing to clean up after their dogs in a park in Clapton.

The park, also known as Daubeney Green or Clapton Park, sits next to the River Lee Navigation and is popular with children and families as it has a large playground, skate park and sports pitches. However, people’s enjoyment of the park is being spoiled by some selfish and inconsiderate dog owners.

Members of the Daubeney Fields Forever park user group contacted the council and put small flags next to dog poos to bring attention to the problem. Council Enforcement Officers visited the park incognito in early April and took action against three dog owners.

Daubeney Fields is a much-loved local park which is well-used by the local community - a green space where children play outdors and familes eat picnics on the grass.

Eight out of ten dog owners who use the park clean up after their pets. Sadly, a small minority fail to bag and bin their dog’s mess. They spoil it for everyone else and create a health hazard.

Hackney Council's crack-down gives a clear message that dog fouling will not be tolerated. We hope that it leads to a clean park which we can all enjoy. 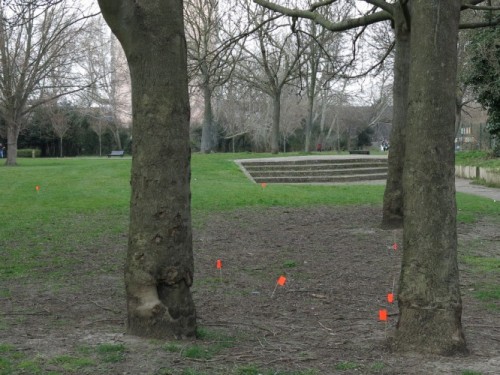 The fine for dog fouling is £80. If you are caught more than once you can be taken to court and fined up to £1000.

If you have any information about where and when people are failing to clean up after their dogs, contact the council:

Visit www.daubeneyfieldsforever.com to find out more about local activities in and around the park.