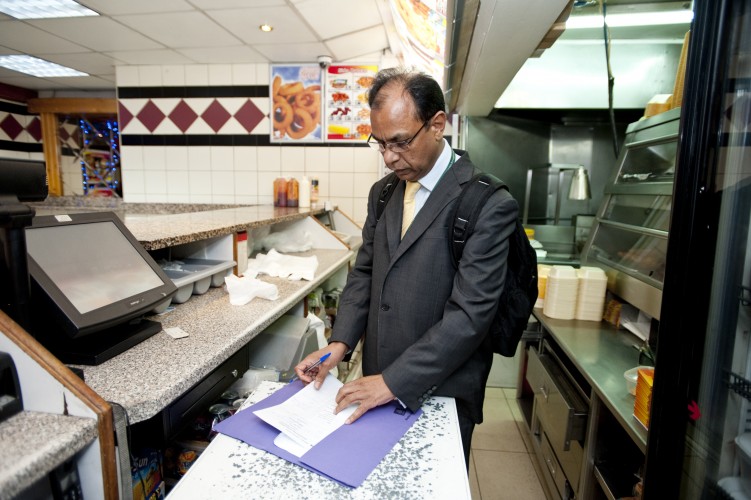 A quarter of Hackney businesses visited as part of a crackdown by Hackney Council and HM Revenue and Customs (HMRC) were caught paying less than the national minimum wage.

A total of 13 employees at the businesses were found to be losing out on up to £3,800 during recent inspections.

The visits are part of joint operation between Hackney Council and HMRC to identify businesses that are not paying at least the national minimum wage. HMRCs hidden economy team also took part in the operation, identifying people and businesses under-declaring their earnings or not meeting their legal tax responsibilities. So far 40 businesses have been inspected with more visits planned.

Through joint operations like this we are catching those employers continuing to flout the law by not paying their employees at least the national minimum wage. The Council also remains committed to making Hackney a fair pay borough, where nobody is expected to do a hard day’s work for less than they can reasonably live on.

Hackney Council already pays all its directly employed staff the London living wage and our new contract for care workers will complete the process of securing at least a London Living Wage for all of the Council’s contracted staff.

On Wednesday 19 March four teams visited 21 food takeaway businesses across the borough and found four businesses paying five people less than the national minimum wage, costing the employees around £2,800. In addition, none of the premises visited were VAT registered and officers found irregularities regarding Income Tax, with one business never declaring income tax despite trading for over ten years. More than half of the businesses had no records of the businesses sales or takings and HMRC will continue to investigate around 14 businesses.

Council environmental officers also found a number of issues including a business operating from the kitchen of another, two businesses had a mice infestation and volunteered to close; 12 had no formally trained food handlers and a 12 were operating past 11pm; 11 didn’t have any pest control arrangements and 11 were not displaying a premises licence. In total 241 failures were recorded against the Council’s environmental health check list. The Council will be following up with additional visits to ensure that this advice has been acted on.

During an earlier operation on Tuesday 11 March, eight teams visited nineteen phone shops. Officers from HMRC officers identified six premises who were failing to pay eight staff members the national minimum wage, worth around £1,000 to the workers. In addition, of the 16 premises visited, officers found nine irregularities regarding VAT, four regarding Income Tax Self Assessment and 13 regarding PAYE.

Council trading standards officers also found a number of issues including 12 businesses failing to display their company name; nine with pricing issues; seven making restrictive statements around no refunds or exchanges; eight had Trade Mark issues and in addition eight premises had no valid street trading licence. One business had no toilets for staff and two had no water provision. Six businesses had electrical safety issues including dangerous electrical chargers which do not have sufficient distance from the pins to the edge of the socket, anyone pulling it from the socket risked electrocution. A further 11 didn’t have electrical certificates. All the businesses were advised on what they needed to deal with any issues. The Council will be following up with additional visits to ensure that this advice has been acted on.

Home Office Immigration Enforcement made six arrests during the operation.

Michelle Wyer, assistant director of HMRC’s national minimum wage team, said: “Paying the national minimum wage is not optional - it’s the law. It is unacceptable for employers to cheat staff and HMRC are pleased to work with Hackney Council to ensure the rules are being followed and take action where they are not. Last year over 26,000 underpaid employees got back a share of over £4 million as a result of HMRCs actions.

"Where we find an employer ignoring the rules, we will ensure arrears are paid in full and the employer is fined. In the most serious cases, criminal prosecution can follow. Anyone who believes they are not being paid the national minimum wage can call the Pay and Work Rights Helpline on 0800 917 2368."

David Seymour-Smith, head of the North London Home Office Immigration Enforcement team, said: “This was a successful operation resulting in a number of arrests. Employers who use illegal labour are defrauding the taxpayer, undercutting honest employers and denying legitimate job hunters employment.

“Working with partners like Hackney Council and HMRC we are determined to tackle those businesses that chose to flout the rules. We will continue working together to ensure businesses comply with the law in the future."

HMRC have the formal legal powers to take action against businesses that aren’t paying the national minimum wage.

Employers not paying at least the national minimum wage could be fined, find themselves having to back date pay to an employee and end up in court.

The national minimum wage is a legal requirement and all employers must pay this to staff over school leaving age.

The national minimum wage rate per hour depends on age and whether or not someone is an apprentice. Anyone aged 21 and over should receive a minimum of £6.31 per hour.

Hackney Council began a campaign in 2013 to make employees in the borough aware of the national minimum wage. Any employee not being paid at least the national minimum wage should call the Government Pay and Work Rights Helpline on 0800 917 2368, Monday to Friday, 8am to 8pm Saturday, 9am to 1pm. The service is free and confidential. The helpline also has a free translation service available in over 100 languages. Employees can also visit.

The London Living Wage is paid voluntarily by employers and is currently set at £8.80 per hour.

Anyone who believes they are not being paid the national minimum wage can call the Pay and Work Rights Helpline on 0800 917 2368.

Extend eviction ban to prevent homelessness crisis, Hackney urges government
We shouldn't ignore that some parts of our community are impacted more than others
Eid Message from the Mayor of Hackney
Eid ul Fitr: Having a happy and safe Eid
Council to be at heart of localised track and trace programme
Hackney Carnival comes home for a virtual parade of online short films