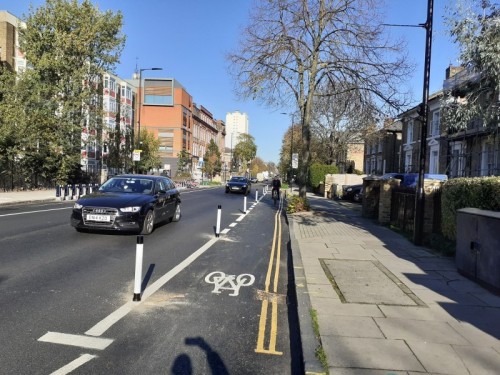 A new protected cycle lane is among measures being introduced along Green Lanes in a bid to reduce accidents along the road and encourage active travel.

The scheme is being introduced from Monday 1 February using an experimental traffic order for a maximum period of 18 months, with residents invited to have their say online or in writing as it is introduced.

In February 2020, the Council consulted residents and businesses on improving road safety along Green Lanes, with 85 per cent of those taking part in support of the proposals.

The works include creating protected cycle lanes on Green Lanes between the junction with Petherton Road and Woodberry Grove, new and updated road markings and the removal of nine shared parking bay spaces between Brownswood Road and Myddleton Avenue.

“The coronavirus pandemic has changed the way we all get around. People are walking and cycling more, spending more time in their local area and significantly reducing the amount they travel by public transport, as capacity remains much lower than before the pandemic.

“By developing this cycle lane, and the surrounding works, we are building on my previous commitment in 2016 to this project and last year’s pre-Covid consultation. We aim to reduce accidents along Green Lanes, as well as creating an environment that will encourage more walking and cycling, improve air quality and reduce emissions in the borough.

“Given lockdown restrictions remain subject to change, public transport capacity remains much lower than before the pandemic, and 70 per cent of Hackney households do not own or have access to a car, it is important that we support all residents to walk and cycle instead, helping to prioritise public transport for those who need it.”

Temporary traffic lights will be introduced on Friday, 5 January, in order to remove the seven traffic islands between Petherton Road and Seven Sisters Road as part of day-time hours works.

There will also be road marking improvement works between Petherton Road and Woodberry Grove from 10 February. These works can only be done at night-time and will take place between 7pm and 1am. These works are necessary to reduce traffic congestion and to reduce disruption to pedestrians around the area during the day. There will be minimal noise after 11pm and the road will remain open.

We will also have to close the Lordship Park junction on March 22 and the Brownswood Road junction the following night to carry out the resurfacing works on Green Lanes at its junction with the two roads. We will start the works at 8pm to minimise disruption in the area. On 24 March, we will work with four-way traffic lights to complete all the road markings on Green Lanes to install new cycle lanes, but this will not require any road closures.

Between November 2015 and October 2018 a total of 51 crashes, which resulted in personal injuries, were recorded on Green Lanes between Newington Green and the borough boundary with Haringey.

Works will include removing central island to accommodate narrower lane widths and introducing waiting and loading restrictions on Green Lanes to improve road safety and ensure smooth flow of traffic.

The council does not expect to close any part of Green Lanes during construction, however there may be some minor congestion while the scheme is put in place.

The parking bays on Green Lanes will be suspended during the works, and vehicles parked illegally may have to be removed.

Weather permitting, the works - which are in partnership with Islington Council will take approximately six to eight weeks to complete.

The Council intends to seek further funding for a second phase of works on Green Lanes (between Petherton Road and Newington Green). However, the intention is to consult on these measures as and when funding becomes available.

The views of residents and businesses, including any suggested changes on how the scheme operates, will be taken into account before any decision is made on whether or not to make the measures permanent.

Comments on the scheme will be collected for up to six months after the measures have been implemented, until 28 September 2021. To have your say, visit rebuildingagreenerhackney.commonplace.is, email streetscene.consultations@hackney.gov.uk or send views to ‘Freepost Streetscene’.