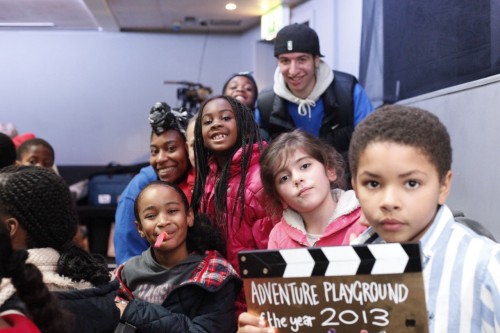 Hackney has officially been named one of London’s top boroughs for children’s play, after Shakespeare Walk Adventure Playground was crowned the best in the capital at the London Adventure Play Awards.

Hackney Marshes Adventure Playground also picked up an award – for ‘most open adventure play setting’ – at the awards on 1 November. Playground users made short films and images as award submissions, to explain why they thought their local park should win the prestigious award. The shortlisted entries were screened at the Park Theatre in Finsbury Park as part of the awards ceremony.

Shakespeare Walk was chosen by a judging panel made up of users of the previous winning park, Glamis Adventure Playground, in Tower Hamlets. The images showed children at the playground building, creating, swinging, cooking with fire, digging and dressing up.

The judges commended the playground’s inclusive atmosphere and the variety of things to do as its main strengths – and the playground is set to get even better, thanks to its prize; a new playground structure, which the children will help to design, and £500 of materials.

Hackney has seven adventure playgrounds, which are directly managed or grant funded by the Council.

Hackney has a wealth of opportunities for children and young people to play, from green spaces to Play Streets and Young Hackney centres. Adventure playgrounds are an important part of this network of free facilities, which are available to everyone in the borough. I’m delighted they’ve been recognised in this way, and I’d like to thank the young people and everyone who made the films and images that helped to clinch the prizes for Hackney.